MISSION: To combine business development, leadership and social action to expand economic opportunities for the LGBT Community and those who support equality for all. 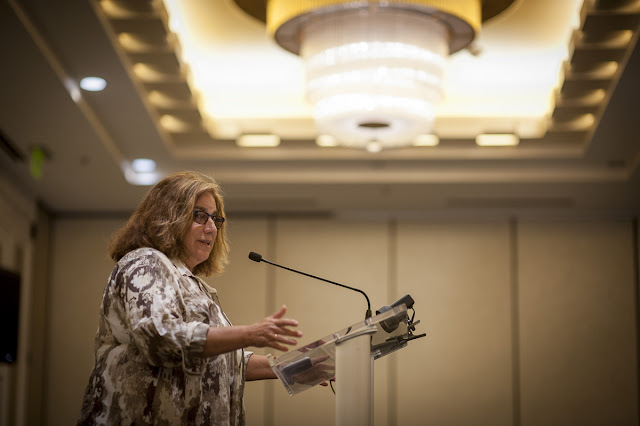 “Madam Secretary, I’m taking 1,300 lesbians to Honduras in six months. Will they be ok?” asked Judy Dlugazc. The National Congress of Honduras had just deposed its own President, throwing the country into a constitutional crisis. Judy’s company, Olivia Travel, had a tour group ready to visit the island of Roatán and she was worried. The country already had a poor record on LGBT rights, and adding political instability to the mix was concerning. Across from her, U.S. Secretary of State paused for only a moment before responding, “It’ll be fine.” So that settled it. Hillary Clinton had her back, so it would all be fine!

Olivia is changing the world. In bringing over 200,000 women around the world since 1990, these cruises organized for women have gone to many places where LGBT rights have not always been respected, including the Caribbean, Africa and even parts of Europe. It is always important for Olivia’s customers to be comfortable when they are out in the world, and Judy says that being there in large numbers helps, but that they also work very closely with the cruise lines and the U.S. government. “The experience of women who travel hasn’t changed that much…It is important for women to come together and be able to feel comfortable when they travel.” Olivia has welcomed trans people, male- or female-identified, to join them since its founding.

In 1973 Judy established Olivia Records, focused exclusively on female artists, and oversaw hundreds of concerts and events around the world. Combining her passions of music and travel, she organized her first chartered cruise in 1990. It was so wildly successful that the organization evolved into Olivia Cruises and has sent over 200,000 women around the world over the last quarter century. This evolution of Judy’s business continues, as her audience has begun to include more and more families with children. She adds, “We’ve taught women how to travel on cruises. But women want to move on from that and do riverboats, or go on safari. They main thing is that we have to listen to our market.” They are even now in the process of creating a resort LGBT retirement community in Palm Springs. Olivia is now the world’s largest company for women in the world!

Things have changed radically over the years. In the beginning, cruise companies were reluctant to let an LGBT-focused organization charter their boats, but now everyone wants a piece of the action. The way in which LGBT people are out of the closet on board the cruise ships has changed, and the understanding of the multicultural crews on board has evolved in turn.

Olivia stays relevant because it keeps moving. “Why is it even a question if LGBT travel is still relevant?” Judy remarked in response to the luncheon’s theme. “Of course it is! Being part of a community is a big plus! When it’s not relevant I’ll know because we’ll stop having great sales every year.” Providing the experiences that Olivia is famous for can come at a higher price point than other cruises, but on what other boat could you have seen Patti LaBelle, Melissa Etheridge and Maya Angelou? “If you are on an Olivia trip as a woman, even if you are out in your whole life, you are still never in the majority in a normal day. That fact that you are in the majority for seven days during an experience is an extraordinary experience, even spiritual. You are able to be yourself without ever even thinking about it,” Judy explains. “The importance of LGBT travel and why it is relevant is that, in a lot of ways it is more fun. You are, as gay people, in the majority, which never happens in most places, especially on vacation. You are comfortable even with the people sharing the elevator. You see entertainment speaking to your own experience.”

Creating a memorable experience while also providing a meaningful and safe community has always been at the center of Olivia’s ethos. Judy was adamant when she said that “It is the responsibility of everyone in the LGBT tourism industry to still provide exceptional experiences. You need to do something even more special, not just bring the community together. Because we create something that is better. If we don’t, we might as well not bother. That is really important.”

Judy Dlugacz is an icon for our community, not just as a business success story, but as a trailblazer for all of us and as someone who has won victories for the LGBT community for more than 40 years. Giving back has always been a foundation of all of her business philosophy. After the 2010 earthquake in Haiti, Olivia worked with other LGBT cruise companies to found the LGBT Haiti Relief Fund and then with USAID to establish a global development fund supporting LGBT organizations throughout the developing world. Starting out on her own as part of a radical lesbian separatist collective, she has now been appointed to President Obama’s LGBT advisory council. Judy is currently working on a book about her four decades immersed in lesbian culture.

Judy Dlugacz, President & CEO of Olivia, was the keynote speaker at GSBA’s June business luncheon at the Seattle Marriott Waterfront.
at 1:27 PM